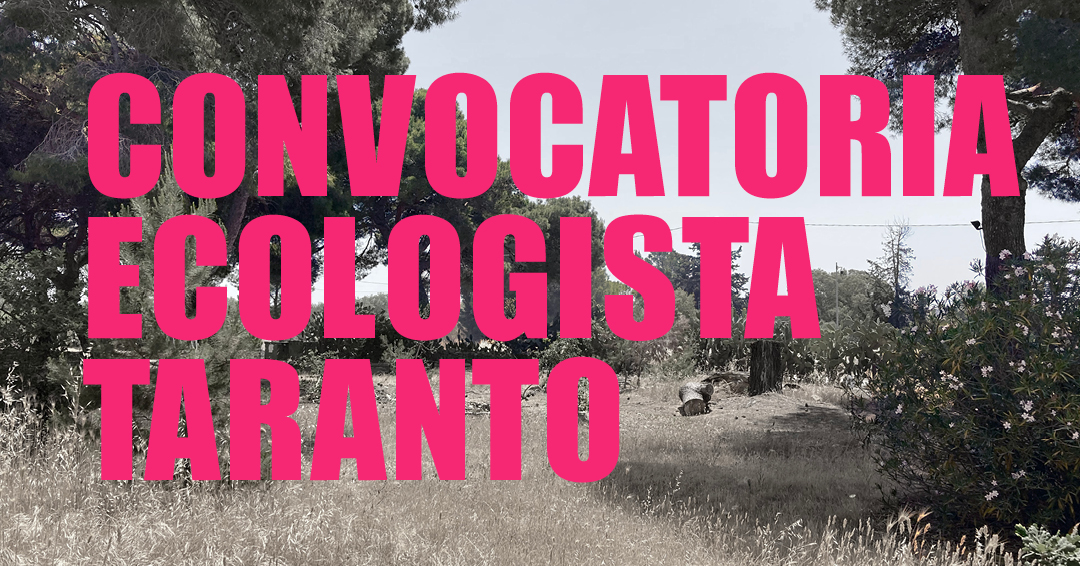 WELCOME ASSEMBLY AND PRESENTATION OF THE CONVOCATORIA

The installation ENTE DI DECOLONIZZAZIONE (ENTITY OF DECOLONIZATION) – BORGO RIZZA (2022) explores the possibilities of critical reappropriation, reuse, and subversion of fascist colonial architecture and its modernist legacy. The installation is an attempt to desecrate the rural settlement of Borgo Rizza, built in 1940 by the Ente di Colonizzazione del Latifondo Siciliano [ECLS, Entity of Colonization of Sicilian Latifundia]. Together with other rural colonies, its function was to reclaim, modernize, and repopulate Sicily, which the regime considered backward, underdeveloped, and “empty.” A very similar architectural blueprint was adopted by fascist colonial urban planning in Libya, Somalia, Eritrea, and Ethiopia around the same time.

A critical reading of the Energetic Transition and the Fourth Industrial Revolution looked through the lens of their geo-political implications in terms of social justice: new extractivism, new war geographies and the project of unlimited expansion of the Capital.

In the group session we will elaborate together on the manifold meanings of being feminist in the South, on The Southern Question through a feminist sight, on the relationship between The South of Italy and The Global South, on privilege and alliances, starting from the territories we are rooted in.

AT THE CONVERGENCE OF ART AND ACTIVISM [OPEN DISCUSSION]

aug 27: BETWEEN DECOLONISATION AND LIBERATION

Local ecological and agricultural resistances against the colonial infrastructures and slow violence defining the conditions of living in Palestine. The movements for environmental justice and sustainable living that emerged as a response to the colonial onslaught in Palestine and the devastating consequences of extractive industries, apartheid infrastructures, destructive industries such as quarrying, monogriculture, water dispossessions, fracking – leading to infertile lands, stunted crops and ultimately the destruction of indigenous epistemologies and ecosystems.

DEFENDING ECOLOGY IN THE GRIP OF WAR AND COLONIALISM

In the Eastern Anatolia, due to the conflicts between Turkey and PKK since the 1980s, forest fires break out and ecosystems and habitats are destroyed. The ecological destructions have shown that the colonial approach of the State is not only composed of oppression, violence and conflicts. As part of the new colonial intervention, natural assets were transformed into war vehicles and huge dam projects and security dams were built on the rivers. In the presentation, the reasons and the results of the conflict process will be discussed through the lens of the struggle and the resistance practices led by local people who have been forcibly displaced – including both mass protest and the foundation of local ecology/environmental associations, agro-seed communes, networks/unions jointly with the ecological struggles in Turkey and beyond.

ECOLOGY, SOCIAL JUSTICE AND THE BDS MOVEMENT AGAINST THE APARTHEID

The panel will revolve around the intersectional aspects of the struggle against Israeli apartheid of the Palestinian-led Boycott, Divestment and Sanctions (BDS) movement. It will address the connection between human rights and ecology, between cultural and social struggles, and the need for a comprehensive approach to end apartheid. Global North complicity will also be a central issue. The panel will explore the right to boycott as well as the interconnected political campaigns supporting the Palestinian struggle for liberation.

The dogma of globalization and the role of msc: more and more goods and mass turism [as if nothing]

The panel will engage with the dimension of the Globalisation 2.0. The reading of the dynamics of cornering in the sectors of shipping and tourism will be the drive to frame one of the main actors in this field: the colossus MSC.

COLLECTIVE PREPARATION OF THE MARCH

In the early evening of Sunday, August 28th, we will go through the public space of Taranto, in conclusion of the CONVOCATORIA ECOLOGISTA. We would like our practices to be shaped not only out of our debates, but also out of the collective making of new experiences of the space.

The ecological struggle aims to open itself to a deep intertwining with new practices of space-crossing. Space becomes a dimension where to experiment renewed class and gender relationships. To embrace visions that question the urban and extra-urban life throughout new models. In the desolation of the city space as a site of profit, militarization and social exclusion, we will try to build out of the ashes of Capitalism towards a new relationship with our territories.

Taranto represents an example among many others of a collectivity deprived of space. From the denial of recreational and pedagogical frames for children in the Tamburi neighborhood, to the closure of a whole area of the seaside – belonging to international military navy bases. Starting from that, the reflection on the right to the city, to self-organized space, to the common good, to the people’s decision-making on the urbanistic and ecological processes meets the methods of the cartographic experience as a collective and communal laboratory.

We aim to create a joyous parade, where rage and struggle can take on a new meaning for rebuilding class and social relationships. The diversity of the social and territorial actors joining the CONVOCATORIA will strengthen a convergence of imageries, which – besides their differences – are systemically connected to the marginality of the spaces we live in.